Doubra told me that some border checkpoints don’t allow pedestrians to cross the border, you need to ask a car driver to pick you up. I searched on the internet, but didn’t find any related information. However I’ve discovered that the initially chosen border checkpoint is interstate one (only for citizens of Belarus and Ukraine). I chose another one (Tomashovka–Pulemets), international one.

It was deserted on the Belarusian border, no cars at all. Even border guards left their booths. Finally I was spotted. The border guard was curious about my tour, so I told him some stories. He shook my hand and wished good luck.

I expected to see Ukrainian checkpoint just in a few meters after that. In fact I rode for 4 km on a narrow road going through a forest. Perhaps Belarus and Ukraine can’t decide who takes the resposibility for this inter-border road, so it was in quite bad condition.

Ukrainian guards were also interesting about my person. They scared me, that it’s already snowing in Kyiv.

Since the only reason to go by the following road is to cross the border, I thought it’d be quite safe to put the tent up near the border. It’s unlikely that someone would decide to pick mushrooms in a forest just before crossing a border.

There was a lake close to that place. Geese yelled for long time, but a few hunters’ shots had ended those screams. Actually I already heard shots in some previous days. I’m not afraid to be killed by a hunter. But I can’t say I like such sounds. In addition hunters often go with dogs, it means I have to listen to barking even when I’m far from villages.

On the next day I had a chance to feel completely the soul of Ukrainian roads and drivers. Simply, the roads and the drivers are crazy. I don’t know whether such crazy roads make drivers crazy or the opposite. I can’t even say those roads are bad. The quality of the same road on whole length varies significantly every few kilometers. Corroded and distended on the road edges asphalt, patch-work quilt on the center of a road, sometimes a narrow white line appears on the edge and you understand, that there was asphalted roadside some day. And then suddenly a few kilometers of nice paved road, just as a short surprise. Feel safer in this case, but, anyway, some drivers going by oncoming lane force you to go on the unpaved part of a road.

There is more trash on Ukrainian roads. Even more than in Russia. Many shops don’t have trash bins in front of them. Though, sometimes I stopped at some nice shops with garden and pavilions.
The scenery is various than in Belarus, but it’s hard to say it takes my breath away, it just changes more often.

On that day I went in Shatsky National Natural Park, there are many lakes around. They don’t look picturesque, but probably it’s nice to swim there in the summertime. Rental ads are everywhere.

I’d left the park, and after that there were no forests. It was getting darker, still no forest, and large enough city Volodymyr-Volynskyi was not so far. Ukrainian forests are marked badly in my navigator, oppositely on a paper map too many places are marked as forests. Luckily I’d bought SIM-card on that day. I checked satellite pictures on Google Maps and went to the opposite direction. Indeed, there was a forest.

At that moment I still didn’t know where to stop in Lviv. Almost all my requests on CouchSurfing were ignored. The mood was not very elated. Fortunately, I’d written about it on Facebook, and Irene from Kyiv helped me in short time. Thank you, Irene!

On the third day I rode through miner’s cities. I was surprised that Ukrainian roads can be even worse. I keep in memory the exit from Chervonohrad. Rain, dust, enormous traffic jam, cars were swarming in dirt. Funny.

Using my previous experience I checked Google Maps much earlier. But it didn’t help me, I had to go quite far to the nearest forest. In the morning I was discovered by an old lady who picked mushrooms.

On the last day I met two shepherds. I was fed and we drank horilka. Even though I drank just a bit, I’d lost a glove in the field. Time to buy a new pair.

Before Lviv I visited Zhovkva. Small and beatiful city.

There are almost no asphalted roads in Lviv center, only cobbles. In addition they started restoring many of them. So I got down from the bicycle and slowly went on foot a few kilometers in wonderful and amazing Lviv. Had some problems with a narrow door of house entrance, but finally dragged the bicycle inside. 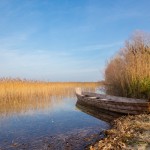 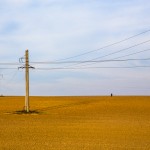 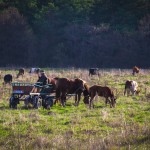 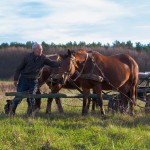 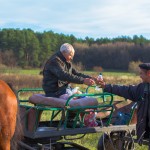 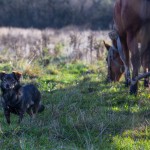 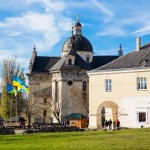