I put the tick into a packet accurately and went to the center of epidemiology. All needed doctors in that remarkable center were sick or took a vacation. Instead of them there was a woman who specializes in some different aspects of epidemiology. To make two tests (tick-borne encephalitis and Lyme borreliosis) a tick has to be cut in two pieces: head and belly. The woman didn’t know how to do it and sent me to another building.

And again, as in the case with dental clinic, I felt I’m in sci-fi movie: coded locks, dangerous signs “biohazard”, serious people in white smocks. An old lady with shining eyes grabbed my tick. She obviously wanted to start dissection as soon as possible. Unfortunately, after a few minutes she came back and told me, that the tick is too dry, so it won’t be possible to cut it properly.

We decided to make only one test. I’d got a recipe for prophylaxis. The area of tick bite had to be lubricated by some antibiotic, but in Belarus it’s possible to find that antibiotic only in tablets. So, the doctor advised me to smash a tablet and glue the stuff by plaster. And for the results I needed to call them a few days later.

I didn’t like the city itself. Unnaturally big and inexpressive. Just a place where many people live. The worst impressions from the city—it’s crowded by crazy minibuses (so called marshrutka). They creak on every turn, you become dizzy and start gasping after three minutes spent inside. Windows are curtained, as some people stand inside, but this is restricted by law. Usual buses pass through rarely.

The day before departure a girlfriend of Doubra cut my hair, I’m almost bald again. In the morning Doubra and Katya went to Minsk by car, and I headed for Ukraine. 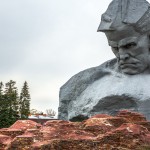 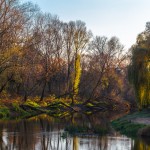 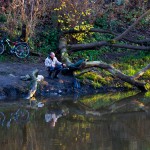