Bucharest prepared for the New Year celebration. Christmas trees on the streets, kiosks selling mulled wine. Dressed up Gypsies (one of them certainly wears a costume of a bear) walked in the commuter town and played music (or just produced some noise to get attention).

So I started thinking of a place for the New Year celebration. Boris (I knew him well due to Moscow CouchSurfing community) wrote me he is going to Montenegro on New Year’s holidays. We agreed to meet each other there.

I had ten days to cycle about one thousand kilometers in hilly and mountain areas.

Still, everything was covered by dense fog. Sometimes I could see some movement on the fields. Those were small oil derricks.

There are many secondary roads in Romania and most of them have good quality. Only once I got a really bad road, and I turned to a highway. A sunset blazed on the horizon, and a few stars already blinked over my head. Infinite fields stretched along the road and there was nothing that could change their infinity.

But a small pothole had led me out of trance. I hadn’t noticed the pothole and had fallen down with awkward grace.

That was the shortest light day in the year, probably the most important festival for touring cyclists. So I’d eaten jam and brownies given to me by Roxana.

I wasn’t sure that the chosen border crossing actually works. There was contradictory information on the internet. Luckily, it did, and I crossed the Danube river on the Iron Gates II dam, leaving Romania and getting into Serbia. Unfortunately, the fog was still too thick, so I didn’t see any amazing views.

Actually, it’s quite funny to ride in such fog. You don’t know how much you’ve ridded, whether you are going uphill or downhill. You just move somewhere.

Serbian roads are worse than Romanian, but good enough. Almost no traffic.

Viktor met me in Zaječar. We went to a pub with his friends. Tiredness, warmth, beer and nice atmosphere made the deal: I was close to get a sleep in the pub. Fortunately, the pub located just in a few meters from the Viktor’s house. 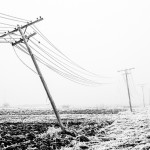