“Bulgaria tours! Vacation at the Black Sea!”. The advertisement of this kind is quite popular in Russia. So, I’m in Bulgaria, at the Black Sea. It’s time to figure out what it is.

The road is empty, only a black dot is looming in the distance. Little by little the distance is getting shorter, and the dot is splitting into two dots, not black at all. That is a couple of guys on bicycles: Christin and Magnus from Germany:
“Hey guys! Where are you going?”
“Along the coastline.”
“Cool! I gonna go with you for a while.”

We are stopping to take a rest at the Cape Kaliakra. My cap has got broken on the way. The first loss in Bulgaria.
Magnus is putting a stove on the ancient ruins. “Wanna some coffee?” Yes, for sure, Magnus, I’m ready to follow you wherever you go as long as you make coffee!

Suddenly Lars is appearing, who I met a day earlier in Romania. “I expected to meet you here”, he tells me. By some unthinkable way he has managed to bring a watermelon. Many times in Romania I saw off watermelon stalls with a sad look. I really wanted a watermelon, but I didn’t know how to carry it. Meal is continuing. A Russian tourist dicontentedly grumbling watching at our bicycles: “And those, probably, have left here since ancient times”.

The first joint overnight stop at the Black Sea. Magnus and Christin have taken out a couple of beer cans and offer to join. I’m looking suspiciously at the cans. No, definitely it isn’t enough for four people. It’s ten kilometers to the city, I’m sitting down on a bicycle and going to buy beer.

Riding in a group is unwonted. So usually I go uphill first, but all the other time I carefully follow the group.

The second joint overnight stop fearless gang of four spends on a public beach. I wouldn’t dare to do that if I’m alone.

Already the third day at the Black Sea in Bulgaria. So, how is it? I don’t know, strange feelings. All those hotels, restaurants along the coastline, all of that looks too artificial. And it seems that there are more Russians than Bulgarians. And though it’s nice to dip into chilly water after a hot day, I wouldn’t spend a vacation here.

We see off with Magnus and Christing, they go into Sofia, I and Lars continue to ride together a bit longer. I listen to fascinating stories from Lars about his previous travels, how he worked as a captain on a ship (not without purpose I got that association with a sailor when I saw his snow-white beard for the first time).

On a bumpy road to Malko Tarnovo the rear rim has cracked. Here I say goodbye to Lars, he’s going to Istanbul next. Before we go into different directions, he gives me already unneeded map of Bulgaria. Before that I preferred road atlases, usual maps seemed bulky for me. Now I draw another traversed path in the evenings and sometimes I like to unroll the map entirely and look the whole my route in the country.

At the end of the city a gypsy boy follows me for long time and yells: “Money-money-money! Police! Police! Money-money!” Oddly there are more gypsies in Bulgaria than in Romania. Often there are prostitutes along the road, mostly gypsies, some of them are pregnant and they stroke their bellies with tenderness. From time to time they send me air kisses.

“Oh, dude!”, policemen, who stopped me, are exclaiming. “Show us your passport ”. I tell them that they are simply curious, I don’t want to dig in panniers. Disappointed policemen let me go.

It’s 300 km till Plovdiv, the closest big city where I definitely can find a new rim. The crack becomes bigger and bigger with every kilometer, but it’s still possible to ride.

I’m standing on the main pedestrian street in Plovdiv at a hostel. Nobody on CouchSufring replied me. A guy on the street takes interest if I’m going to stay in some hostel. Hmm, yes, I’m going to, it’s hard to go anywhere far with a broken rim. He tells me that I’d better go to the hostel where he works, as there is a garden where I can easily leave my bicycle, and a girl from France, also on a bicycle. Sounds cool, so I’m following his advice.

The evenings in the hostel are full of fun. Really nice to meet other travelers and share impressions.

Magnus and Christin are also here. They came for a day by train to watch the city. Wonderful reunion.

Meanwhile the new wheel is ready. Martin from a local bicycle shop has done it fast, qualitative and cheap. Sometimes it happens that all those properties come together. I change the ground off cassette and chain too. Ready to ride.

The Shipka Pass is on the way to Veliko Tarnovo. A father reads a sign on the monument to his son. About the defense of Shipka in the Russo-Turkish war, and how Russian helped Bulgaria to become free of the Ottoman Empire. I’m thinking maybe it’s a time to get some patriotic feeling, to be proud of Russia. No, it has happened by chance that I was born as a Russian. Nothing to be proud of, but also nothing to be ashamed of. But the story is interesting.

A Mercedes with German number plate is stopping at me near the entrance to Veliko Tarnovo. There is a driver from Caucasus and a blonde. They are reaching me a golden ring: “Brother, we are going back to Azerbaijan, take this ring, just 50 €, we have no money for petrol”. Oh, no-no, thank you.

I’m trying to find the house of my host in Veliko Tarnovo. Leaving any further attempt I’m calling him:
“Hello Hristo! It’s Yury. I can’t find your house. There is a sign, it’s written that it’s your street, but there are only stairs going uphill.”
“Yeah, man. You need to go all the way upstairs.”
“Oh, no way. My bicycle weighs a ton.”
Luckily, the house is on the top of the hill, it’s possible to get there by a normal road. After a few minutes we are inside the house. I’m studying paintings and texts on the walls, they were left by numerous strangers who stayed in Hristo’s house.

Just after one-hour walk in the city I have fallen in love with it. Mostly I was amazed by endless street-art there.

In the evening when I left Veliko Tarnovo I’m discovering that I’ve left the knife. But I wanted to make a salad as some granny spotted me at a shop and gave many vegetables. She told me I look like her grandson. Ok, teeth are enough for making a salad.

On the next day I feel sick. What is that: poorly washed vegetables, a sunstroke, dirty tap water? I don’t know. I pitch a tent in the middle of the day in a forest. Between vomiting attacks I’m reading a book “Physics of Sorrow” by Georgi Gospodinov in Bulgarian. This is a post-modern literature, as a main theme author exploits the Myth of the Minotaur and the Labyrinth. The book itself is also like a labyrinth, different stories from different times seem unrelated in the beginning, but later they become interconnected, form a labyrinth. But for me this book is a meta-labyrinth. I can only guess the meaning of many Bulgarian words. Sometimes I make a right guess and go deeper into the labyrinth, sometimes it turns out that the guess was wrong, so I come back to the point where I did a wrong guess and make a new attempt to understand what is written there. Oh, shit, a new vomiting attack, stop talking about the book. By the irony of fate the nearest town to my stop is called “Две Могили” (“Two Graves”). One grave is for me, another one is for the bicycles. Later on it turned out that in Bulgarian “могила” means “barrow”, and I didn’t die too.

A couple of day I preteneded I’m sick and cycled only ten kilometers just to get a bit of food and find water, but in the next days I got stuck again. Heavy rains started, there were news about threats of floods.

I’m following some country roads. Big roads in Bulgaria go away from cities, so usually you don’t meet people, only cars. But the small roads, that I cycled in those days, were quite empty as well. Once I passed a village, there was a speed limit sign and below the sign was a hand-written plate: “Тук все още живеят хора” (“People still live here”). I didn’t meet any people there. Apparently, it’s cool when you don’t need to worry that you won’t find a place for camping, and with a small effort you can find absolutely amazing places for overnight stops. Nevertheless, without people you feel lonely sometimes.

But in short time I’ve reached Sofia and was surrounded people. There were hospitable Diana and Yana who hosted me, Hristo who found my knife in his boot, Teodor who studied with me in the university, Nadya who took my old tyre as a souvenir.

But of course it is not about Bulgaria where I got so much interesting experience. Simply I left Moscow and started my trip one year ago. Everything breaks in one year, but not me. The trip continues. 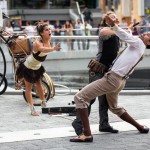 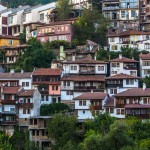 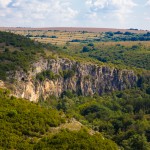 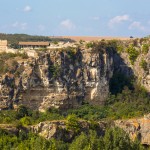 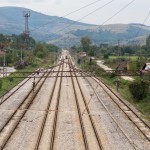 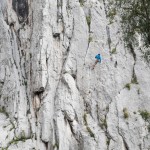 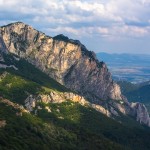 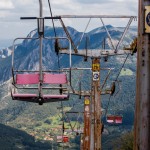 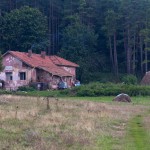 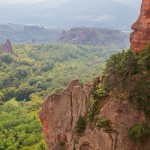 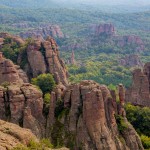 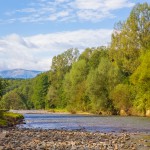 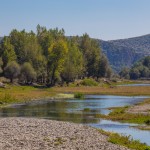