Alex and Jenya, those people who met me initially in Chernivtsi, came to see me off. I felt sad, but after 20-30 km my mood raised a bit.

Every customs guard on Ukraine-Moldova border initially thought I’m a foreigner, and then they said with disappointment: “Aah, Russian…”

Close to the border in Lipcani I withdrew money and bought a SIM-card. A car driver started talking with me. I asked him for a cigarette, but he took an entire pack and gave it to me. He said that I need it.
A forest was close to the city, I stopped there for a night. Actually, forests are rarity in Moldova, so I was lucky.

Ann, who hosted me in Lviv, told me that she’ll help to find a host in Chișinău. A friend of her, Ion, called in the midnight. I didn’t get everything he told me that time as I was sleepy, but I understood that everything will be fine. And after that Tanya, who works in the popular Moldovan internet magazine Locals.md, called me. She got to know that someone will pass Chișinău by bicycle in this time of year and decided to take an interview with me. For sure I agreed and got a sleep in a good mood.

After that I felt a bit responsible about my trip in Moldova. What would I tell in the interview if I’d get some serious problems in Moldova?

On the next day I could check the quality of Moldovan roads. In total, they have much better roads than in Ukraine. Even in some places where roads were completely patched, it was done well and didn’t annoy much. Though, I have to admit I mostly take big roads, as the traffic wasn’t high there.

So I was tired, couldn’t reach a forest and chose a place under a bridge. Ground freezed, I used a stone to hammer tent’s pegs in. Water in plastic bottles started freezing during the day as well, so I put it in the bottom part of sleeping bag.

In the last days I got used to have mobile internet, and I check e-mails and so on in the evenings. But there was no mobile connection under the bridge. I went out on a field, legs and hands were shaking due to cold, but I still checked something on the internet.

Some tea was left in the thermo mug, and in the morning I got a beautiful pattern inside. I didn’t repeat this mistake on the next days.

I cycled in Soroca’s direction, a Roma capital as Moldovans call it. According to Wikipedia only some 3% of Soroca’s population are gypsies, but probably it’s more than in other places of Moldova. Indeed, I met some gypsies on the way. In a few kilometers from the city I met a gypsy who strangely asked me what I’m carrying by bicycle. Seems he didn’t understand I’m just a tourist. He also asked me about my earrings and a person who put the earrings into my ears.

As I understood from talks with Moldovans (and it’s really easy to start a talk with some unknown Moldovan), they don’t really like gypsies, but there is no open confrontation.

Soroca Fortress, the main sight of the city, was closed for renovation. OK, the Dniester River is there and it’s beautitiful.

It snowed a bit during the night. Fields and roadsides still were covered by snow, but the road was clean. The road to Chișinău was repaired in many places, and workers cried and bore me up.

In the next morning I only had to visit Old Orhei, and then I could go to Chișinău. It was very beautiful in Old Orhei, so I didn’t notice how I spent there a few hours. I rushed towards Chișinău before getting dark.

Tanya met me in Chișinău in a place where cyclists usually meet. Dasha took a few photos with me. The idea was to take photos exactly after my arrival to the city, when I’m dirty and unshaved. Tanya took a small interview and we decided we’ll continue after a few days.

Then Jenya, who was found because of Ann’s efforts, came and took me to the home. 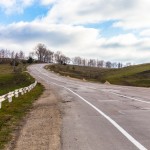 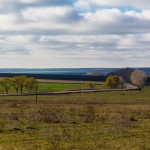 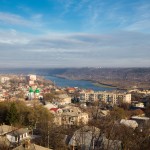 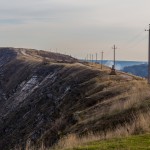 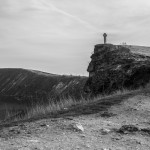