It doesn’t matter whether I praise Grodno or not, anyway it didn’t help me to find gas balloon for the stove. For sure, it isn’t a problem, as my stove is multifuel.

Producer of the stove doesn’t recommend to use petrol from gas stations, but if you have no other options and can’t find unleaded petrol, the producer gives advice to buy low octane petrol: it soots less and better for your health, as you don’t inhale lead additions.

I left behind first, second, third gas stations. Actually gas stations are rarity in Belarus, therefore I’d done about 60 km. And every station had only RON 95 petrol and RON 92 petrol, no RON 80. After fourth station I’d understood there is no other way, I have to buy RON 92. I tried to imagine how I would buy petrol for my 0.6 l bottle. I don’t even know how car drivers do it.

Luckily, there was queue in front of cash desk, and I watched assortment in the shop. There was keresone in litre bottles. Exactly what I needed.

In the evening I did the first test of the stove on new fuel.

Advantages of kerosene (and other types of liquid fuel): it’s cheap and widely spread.
Disadvantages: it soots (I need to clean jet often), running and stopping of the stove takes longer time, you need matches for ignition (couldn’t do it with a lighter), other things.

The test had ended up successfully, I had oatmeal with beans for the supper. Maybe it’s a strange combination, but tasty.

Probably I should tell what I usually eat. In other countries I’ll have something different, so it’s a description of my current ration.

For breakfasts and suppers I usually cook porridge (buckwheat, rice, oatmeal) or macaroni. Add some canned goods like green peas, corn, beans and so on. If I have some raw vegetables like tomatoes I use them as well. I don’t eat meat as cooking and storing it is a troublesome process. But from time to time I buy fish canned goods. It’s very convenient since I can buy it in small tins. If I would buy tinned stew, I won’t be able to eat it completely in one day. Oh, come on, I won’t lie. I eat like a big horse. In the beginning I thought it’s possible to cook full pot of food in the evening (one litre) and eat some remains in the morning. No, I didn’t leave any remains so far.

And someone would be jealous about my ration during a typical day: bread, cheese, fruits (mostly bananas and oranges as I don’t need to wash them), cookies, chocolate, nuts/halva, curd, glazed cheese. Therefore, no surprise such a person with sweet tooth had lost that tooth, hahaha.

I’m not going to switch on pasture yet, however, when I throw down fat slugs from the tent walls, I think about it. It’s treated as delicatessen in some countries.

Fortunately, there are slugs only in rainy days, and on the second day I got sun for the whole day. I allowed myself to change gloves and to take off jacket. I didn’t get such a good weather previously.

I’d passed Ruzhany, there is an old ruined castle, it’s beatiful. And in Kosava they started restoring the castle, there is construction and fence around it, it isn’t beatiful.

It was so warm in the night, that I used the sleeping bag only as a blanket. I’d got terrible cough in the morning.

On the next day I planned to see something in Pruzhany, but whole day was quite windy, I lost my power. And the first people I met in Pruzhany were like Russian bandits from 1990s. Finally the wind calmed down, and I had enough power to go very close to Białowieża Forest. But I was afraid of bisons and boars, so I stopped earlier.

I worried I won’t be allowed to go through Białowieża Forest from the eastern side and I’ll have to make detour. It turned out everything is quite simple: you just pay money, get a permit with approved route, then simply follow that route. If you don’t go too close to Polish border, you won’t be asked to show the permit.

Of course, I didn’t see wild animals on the way, they live in a different part of the forest. But I saw some strange feces. Except of it the forest is like an ordinary forest, nothing special. But it was really nice to ride there alone on a good paved road.

After 30–40 km I came to the side where usual visitors arrive. Visited a residence of Belarusian Grandfather Frost, but it turned out that he is quite greedy for money. Even if you want just to see his house, you have to buy a ticket. Do I need to write whether I believe in Grandfather Frost or not?

At the entrance to Brest I met a girl Natasha. She rode a bicycle and was going to her cottage. We talked a bit, exchanged our phone numbers, and she even promised to host me in case of any problems.

I didn’t get any problems. Doubra, who came to Belarus from Nigeria to study architecture, waited for me. When I took a shower I scrabbed skin above the pubis, as I thought there is dirt. But it’d turned out there was a tick. I’d done everything in wrong way. But beer with Doubra and his friends took anxiety and alarm away. 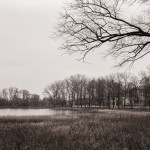 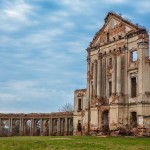