Perhaps, Grodno is my favorite city among other Belarusian cities. It’d be falsity to say that I was amazed by some amenities. But Grodno is the only big Belarusian city, that I could percieve as a single entity. In other Belarusian cities it seemed, that some giant took central part, sleeping and industrial areas and awkwardly tried to combine them together. As I see, Grodno has natural combination of different areas.

I have to thank Lena and Dasha who hosted me in Grodno. Due to their efforts I felt like at home and stayed for a longer period.

Dasha and Lena use bicycles for transportation in the city, so in the first day we took a bicycle ride together. I didn’t try to ride bicycle without panniers since I’d departured from Moscow. So I felt very clumsy. As a bear (not from circus!) on a bicycle.

On the depature day it was Dasha’s son birthday. I blew air balloons for him in the night, and in the morning, when I gathered my stuff into panniers, he asked with astonishment: “Are you leaving now?” 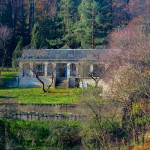