By tradition I’d left Lviv in the late afternoon. Very late. Too late. German helped me to hang panniers on the bicycle. In the last moment I told him my phone number, but forgot to take his. It was unclear whether we’ll meet up some day or not.

I went away not far from the city. The road became hilly, but I didn’t feel tired. It was interesting what I can see after the next hill.

I spent the night on the top of one hill which rose behind a fallow field.

There were almost no villages on the way to Rohatyn, my eye took a rest. Getting closer to Burshtyn I’d discovered quite a big lake on the map. That’s almost all I can say about that lake, nothing interesting. After that there was Burshtyn TES (coal-fired power plant) and dozens of power lines. Wires buzzed so hard, that my eye started twitching.

Several times on the way I saw posters calling to visit Old Halych. Ok, let’s watch what’s there. That’s what I thought at that time. But that area didn’t amaze me at all. Though, there was a beautiful forest. I’d stopped there early to explore Ivano-Frankivsk in the next morning without rush.

It was warm that day. I took out the mandolin outdoor for the first time, sat under a tree and played till twilights. Gradually the feeling of freedom rises inside me, the feeling that I aim to, I think. I myself establish rules and restrictions of my life. If I want to stop earlier just because I liked a forest—OK. Have remembered about the mandolin—why not.

In the early morning I’d come into Ivano-Frankivsk, rode a bit in the mostly pedestrian city center and had left the city. On the exit from the city I met ten of lycra cyclists (there is a popular word in Russian for this type of cyclists: “helmet-gay”; I don’t want to offend anyone, nor spandex cyclists, nor gays, it’s just a note). For some time I was able to follow them, but at some moment they hadn’t stopped at traffic light. I’d stopped and turned to a shop to express protest. The owner of the shop did a small discount when asked about my trip.

Finally I was in Carpathian Mountains. Shortly: I didn’t like that experience. But this is only my experience, it’d be stupid to generalize it.

I imagined how I’m pedalling, hills and mountains are spreading out around, flavour of a fir forest is tickling my nose, and no one is there. Unfortunately only villages spreaded along the road, village after village endlessly. Numerous hotels and guesthouses on the way. I think even if I’d choose less popular road, it’d be the same, the only difference is that it’d take more time. So, I’d come to the conclusion that it’d be better to travel there on foot, away from people.

Maybe I’m influenced by Nepalese mountains too much, it’s hard to surprise me.

Nonsense, but it was hard to find a place for wild camping in Carpathian Mountains. All the flat places were conquered by owners of houses and hotels. I found a place under an electric tower and worried a bit that my brain will be burnt after a night in such place, but there were no other options (except of guesthoses).

Strangely I’d done many kilometers on that day. I thought: “OK, just a bit more, just a little bit higher, and, perhaps, less houses will be there”. It’s funny to recall how I shifted on the lowest gear and climbed slowly on hills, and dogs ran side by side and barked without stop. So, in that evening I was on the highest point on my way in Carpathian Mountains.

After that I had to go only downhill, but I can’t say it was easier or faster than going uphill. First, you can’t carelessly roll down: with the quality of those roads you feel that you are doing slalom, just instead flags you’ve got potholes. Second, moveless hands on the brakes become cold fast.

When I was low enough I went by a road along a river. There were a few variants, but I liked how the road curled on the map following the bends of the river. Actually, there were two roads, on the both banks of the river. One was better, another worse. Still, they repaired the better one, so I needed to cross bridges sometimes and follow the bad one. Later in Chernivtsi Alex told me that a few days before my arrival there was a strike on the main bridge in that area. People wanted improvement of the road.

As in the previous night I’d got a problem with a sleeping place. I tried a field. In the darkness it seemed that there was a small forest behind the field. But that forest was placed on a steep hill. On the way back the bicycle had stuck in a deep muddy puddle. After a few seconds the bicycle had fallen down, the panniers were dirty, socks were wet, downpour strengthened. Despair was getting heavier, I tried to find a place on a cemetery, but the gates were closed. Corpses don’t wait for me yet.

There was an abandoned railway station and an open house, I could stay there for the night. But I watched shit and broken bottles in the corners and decided, that it isn’t a place I dreamt about. I’d put my tent up close to that house in the middle of three trees.

I planned to get a Romanian visa in Chernivtsi, so I needed to stay there longer than I usually do. People from CouchSurfing obviously didn’t want to host an unknown persons for long term. Liza, the girl I met in the last evening in Lviv, gave me a phone number of Alex. She told me, that I can stay in a squat he manages. Alex didn’t pick up the phone and didn’t reply SMS.

At this moment in the narrative I have to describe it very dramatically. In fact I didn’t feel depressed. I was laying in the tent, socks and feet were dried up, and tomorrow is another day. In the worst case I could always build a camp near Chernivtsi and visit the city only to have deals with the documents.

Luckily, nothing like this had happened in reality. Alex answered in the next morning, and I somehow managed to ride 70 kilometers just in 3 hours. Alex and Jane had brought me in the squat through the back entrance. It’d be suspicious if I’d go there with my bicycle through the main entrance. One room in that abandoned house is arranged for habitation, it’s very nice there. I’ll write much about the place later on, but some details will be omitted, as I don’t want to attract attention of inappropriate persons (even though those stories are quite interesting).

Liza, thanks again for your help! 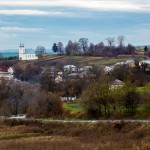 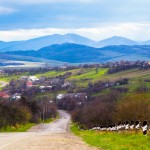 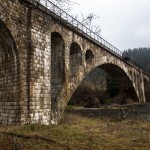