As always I’d left the city too late. And as always I was lucky with weather—the weather was nice when I stayed in Minsk, but on the departure day it was raining. First I went to Minsk Sea, but I could see only gray water and frog. I’d canceled the plan to go along the bank.

During a one short stop a one-legged man hobbled toward me. I couldn’t understand his words, and tired man just sat down next to me in the rain. He wanted to go somewhere by bus. I waved to the first passing bus, but it didn’t stop. A strange pair, the cyclist with the loaded bicycle and the one-legged on the roadside, saw after the bus leaving into the rain. I’d figured out where the bus stop is. The man told me he’ll go there alone. It was very sad to watch as he stood up groaning, took his crutches and dragged slowly along the roadside.

Though Belarus doesn’t have mountains, that day I’d discovered I ride uphill and downhill quite often, I even sweated a bit. Then I’d seen a sign telling I’m close to the highest point of Belarus—Dzerzhinskaja mountain, only 345 meters above sea level.

It was very windy in the night, remained leaves tumbled on the tent with noise and slided down. In the morning water on the tent got frozen and fallen leaves glued heavily to it.

In spite of night cold the following day was sunny. Perhaps it was the most pleasant riding day for the whole time of the tour. I wonder how it’d be nice when I’ll travel in warm places.

In that night a strange bird cried in a forest, those were such sounds as if someone is raping a girl. Actually, that was my first thought and I was ready to run to help that made-up girl.
I already recognize voices of different birds, but I don’t know their names and, of course, how they look like. I just name them by sounds they produce: “phew-phew” and others.

Generally, the most irritating sound for me is barking of villages dogs. Even if I stand in two hundred meters from a house with a dog, it starts barking restlessly. Such a non-lazy dog! And what a nightmare to keep a dog who barks on every passing car. Those dogs don’t stop even in the night, so now I check, that I don’t hear any barking in a new sleeping place. And I’m OK with the sound of passing cars in the night, it makes me more patient.

There was full moon that night, I could see forest very well. I also noticed my eyes are getting used to darkness.

In the morning I stopped close to Nesvizh to visit a shop. One man shaked my hand for long time when he got to know I’m going to Romania later. I helped his friend on a crazy bike to fix its handlebar.

Unfortunately I have to notice, that people in Belarusian villages mostly buy cheap alcohol. Women as well as men. Talking on the road also usually involves crazy or drunk people. Others, even if they are curious, don’t determine to talk with me. Even shop assistants, who were so curious in Russia, only look at me with interest, but don’t ask any questions.

I liked the Nesvizh castle obviously located in Nesvizh. But unfortunately I didn’t feel it’s old when I looked at it. A nice park with plants from different countries is placed around the castle, but it’s better to walk there in another season.

After the Nesvizh castle I arrived to the Mir castle. It didn’t leave such a strong impression as the first one. And the weather became worse at that time.

I decided to cook something different for supper and bought fast-cooking rice. Inscription on the box promised, that the rice will be cooked in 15 minutes. Cooking on a stove takes less time, and I expected it’ll take about ten minutes. In reality I waited twenty minutes or so, but the rice was still uncooked. A few small leaves and mosquitos had fallen down into the rice, so I ate the half-done rice with strange additions.

A corn jar started tinkling in the night. I looked out what’s going on, but didn’t notice anything. It happened a few more times. Finally it turned out, that a moleskin wanted to get out from the ground exactly in the place where I put the jar.

On the fourth day I rode through Navahrudak. I marked it on a map as a place of interest, but after four days I forgot what’s there. Anyway, it was so froggy that I couldn’t even spot a sign bewaring about frog on the road, so I wouldn’t see anything in that place.

In addition to the frog I got downpour, and my clothes finally started leaking a little: knees, socks, and gloves. Though I should change the gloves anyway, membrane has rubbed away and now everything is in the wrong way: water leaks inside, but doesn’t come out. Moisture made my fingers swollen, and I started losing fingerstips’ skin.

The last several hours I pedalled with the lowered head to protect it against rain and strong wind. So I could see only a white line on asphalt separating the road and roadside. Well, I also saw a few smashed animals. In Russia I mostly see dogs smashed by cars, sometimes cats, but in Belarus the most popular dead animal on a road is hedgehog, sometimes very big ones. Once it was a fox.

There weren’t cars on the road at all, even people on a car didn’t want to go in this weather.

But these sufferings are worth it. In the evening you lie in a warm tent, drinking hot tea, inhaling smell of coniferous forest and listening to music getting so deep into you as you never experienced before. And rain knocks your tent outside.

OK, that’s lyrics. Actually the noise of rain is strong enough, and it’s hard to get sleep.

On the last day I’d reached Grodno very fast without adventures. Lena and Dasha warmly welcomed me, we drank tea non-stop and talked, talked and talked. 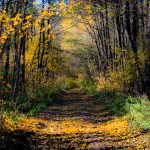 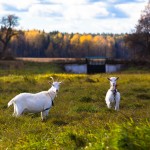 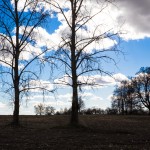 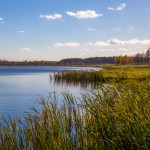 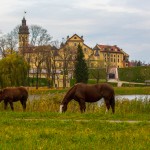 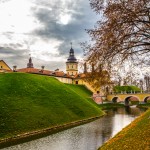 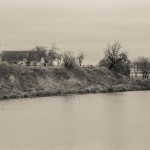 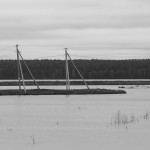