I was asked by many people why I decided to start my trip from Moscow in the end of September, the time when cold is coming.
Actually I planned to start from Hanoi, but some circumstances had changed, and I made a decision to fly from Hanoi to Moscow. I spent about 3 months in Moscow, half of this time is more than enough to get prepared for the trip (even if you take into account the terrible slowness of the Russian Post). But it’s my nature to be a slowpoke, time ticked and ticked, and I’d finally decided it can’t last forever, I have to go.

Departure at this time with unpleasant weather meant I had to take all the needed gear (warm clothes, stove, warm sleeping bag, etc.). If I would start from Hanoi, then I could manage such problems on the way. Anyway sooner or later I would face such weather, so there’s nothing to regret about.

I started finding a host in Smolensk the day before departure. An approximate route was estimated in the night, so I didn’t sleep well before my depature (in spite of this I’d started only in the middle of the next day, not in the early morning). Sergei and Yury, the people who hosted me in Moscow, helped me to take out the bicycle. Rained hard. I tried to ride a bicycle the next 50 meters. It was incredibly hard to control it. Ok, it was hard even to hold it on the same place. After all, except of obvious gear I had to take, I also had a very heavy backpack with electronics (camera, lenses, notebook, etc.), heavy tripod (you can’t use lightweight tripod with a heavy lens), and mandolin as a highest point of my idiocy.

Almost everyone who writes about bicycle touring says how important to take only necessary things. Put everything you have on the floor and take only half. But at the moment I’m writing this text and have got used to the weight of loaded bicycle, I can’t say something was unnecessary.

Also everyone writes that it would be better if you take a ride with panniers before your departure. To feel it. This is undoubtedly useful advice, but I don’t see a big difference whether you get used to it before your departure or a few days after.
The only problem you can get—it’ll be so hard that you’ll decide to come back and never start again.

The same opinion I had about physical background. It’d happened that the last month before the start I didn’t ride a bicycle at all. Anyway, on the road your muscles will become stronger and will get used to everything.

So I drove off the house trying to hold the handlebar straight and not getting attention to the plumping sound from one of the panniers. Rain didn’t stop. That day I had only one global question (usually you’d expect more such questions when you pedal for the whole day): what the hell I was born, do I need this suffering?

In the first day I managed to ride 58 km, though I wanted to drove off as far as possible from Moscow. I started choosing sleeping place too late, it was almost dark. I found a few trees hidden by bushes not far from the road. In that place I found an old empty vodka bottle, thus it was obvious someone was there before me. It didn’t worry me. I decided that if no one would appear during tent mounting, then the place is safe.

It was nice to take off socks at last and get into the tent that gave a protection against the rain. I did everything for the first time: to install the tent, to cook tea and food using the stove, to use, after all, folding knife not at home, etc. Hot tea and food boosted my mood a bit, and I even smiled two times.

I figured out that the torch light reflects from the tent walls and it can be visible enough. I’d heard a woman’s voice: “Oh, who is there? This is our place!” I put on my pants fast and looked out from the tent, but those people disappeared and didn’t bother me. Nobody bothered me that night. But if somebody thinks that I relaxed and got a baby sleep, he’ll be wrong. The sleep was very sensitive, I constantly listened to various rustles. In the full silence any sound, even very weak one, would be heard as a very sudden one. Thus, sometimes it seemed to me that someone is coming rustling by his feet on the ground. But it was my stubble touching the tip of the sleeping bag.

Luckily that first night has ended up finally, and I didn’t decide to turn back. In the morning I prepared for a very long time. For cooking, hygiene, gymnastics (it’s very important to stretch yourself before ride) and gathering my belongings I’d spent 3,5 hours! For sure now I know this routine very well and it takes one or one and half an hour (if I want to lie more in the sleeping bag).

I’d reached Mozhaysk. There I was spotted by an old man, he was very curious about my gear. He was a chairman of a tourist’s club in Mozhaysk and regularly rode by bicycle in Crimea. He told me I can go by M1 highway and it isn’t so unpleasant as I try to imagine. He gave advice about sleeping place, but I din’t have enough power to ride there. I remember as I crossed Borodino, watched newly installed wooden milestones (made in old fashion way) and the monument of Suvorov (for some reason it isn’t a statue of Suvorov, but an eagle!). That sleeping place was better, but still not very nice.

On the next day the weather became even worse. In addition to downpour there was strong wind. Sometimes the bicycle didn’t want to go downhill without pedalling, so strong the wind was. Sometimes I didn’t have enough strength to go uphill, so I went on foot. By the way at that moment I was mostly comfortable with the all my baggage, but going uphill was hard. I didn’t have enough endurance and on the long hills I was exhausted.
I tried M1 highway, terrible experience. High traffic, trucks blow you from the road, no pleasure. Maybe it’s ok for someone who is in rush, but not for me.
That day once and for all I understood I can’t reach Smolensk the day I discussed with Sasha who agreed to host me in Smolensk.

Sasha had told me he will wait me on any day, and it was a relief for me.

Sometimes the sun appeared, I could watch rainbow, then I got hail. Once it was snowing in the morning for 5 minutes (exactly at the moment when I collected my belongings). I’d recalled that I can eat chocolate, legs, legs got used to pedalling, the mood improved.
It was hard to force myself to brush the teeth in the evenings, after all, it’s so warm in the tent. And going out to take a piss in the night is very unpleasant. I wonder what climbers do in such cases. I’d like to have some hose which goes outside from the tent.

I passed Vyazma, there is a big sand-pit near the city. I had an impression that the sand-pit gradually gets over the city, not a nice city. It was the first time I locked my bicycle visiting a shop, people looked very suspicious there.

The hell had started after Vyazma. There is a road R134 from Vyazma to Smolensk. I watched some videos and photos of this very bad road at home. I even sent a message to Yury to be sure this is that famous road. But there weren’t many options. And from Vyazma this road started as a paved road. Probably that’s my idiocy (or optimism), but I’d decided to take this road. After 40 km asphalt disappeared and that unpaved road was fully covered by sand.

Right away I’ve recalled our trip by motorcycles with Sergei Bochenkov in Cambodia. We got stucked in a forest where the the trail was full of sand. Here I got the same, but I was alone, with a bicyce, and in addition and got gigantic pools with mud, sometimes those pools were 50 cm deep. Fortunately all my bags are waterproof, so it was possible to cross these pools safely. I couldn’t ride there, wheels went too deeply into the sand under the weight of my bicycle.

At last there was a junction and I could ride in another direction. I rode 8 km till Ivashkino village and wanted to go further by country roads, but men told it would be even worse. They gave me adive to go back and struggle forward, because after 5-7-10 km (I got different opinions) there will be asphalt again. And after that everything is fine till the very Smolensk. I listened to their advice and got back to the unfortunate road.

I slept in a totally wild place. I’d heard howl and roar in the night. Probably those were wolves, but the sound was different than in cartoons (I didn’t have a chance to listen to a wolf so far). As I could estimate by the sound, one of the wolves was somewhere in two kilometers from me, and another one ran about in 500 meters. Back in the daytime I’d noticed steps on the sand, they looked as dog’s steps, but I understood dogs don’t run in that area. I was very terrified and I suppressed a wish to let out everything I had in my stomach into underwear. I looked out which tree is most comfortable to climb on. For unknown purpose I took the knife and sat in the tent with the knife wearing only underwear. After that the wolf had disappeared somewhere and I put my stereophones in to calm down myself (yes, I’m an idiot).

After this incident I’d understood I should read about wild animals. And not only about them. For example, almost every time I saw many different mushrooms in forests. But I don’t know which ones are suitable for food, otherwise I would fry them.

The day of arrival in Smolensk was very hard. Lengthy hills didn’t stop. In the beginning I went on foot only on some of them, gradually more and more hills were reached on foot, not by bicycle. But I really wanted to reach Smolensk that day. When it got dark I’d turned on a bicycle torch and figured out it doesn’t light the road well (yes, I had to check it earlier), so even going downhill was dangerous. And going down on foot with the bicycle was even harder than to push it uphill. In the city I found Sasha’s house by GPS navigator, and I mixed up left direction with right direction a few times, I was totally exhausted. I leant my bicycle on a milestone, but it slided down and I simply sat near the road and took a rest. A car had stopped nearby, guys ran out and started asking with agitation if I hurted myself badly. I’d explained I’m fine.

I was at Sasha’s house almost in the midnight. Took a warm shower after 6 nights in forests and got sleep. 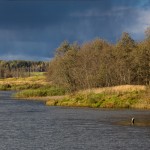 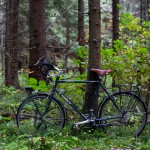 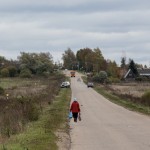 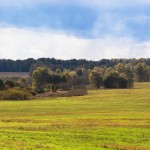 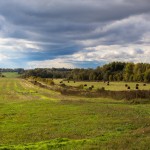 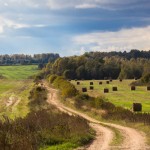 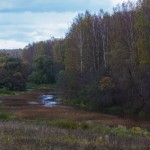 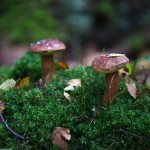 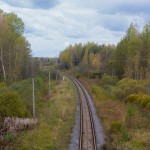 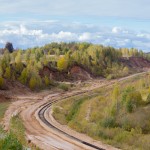 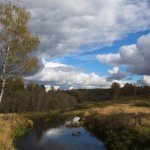 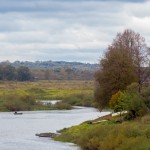 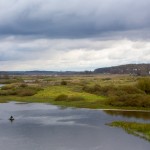