Sasha and his wife Katya offered me a separate room. I tried to enjoy what the civilization can offer me as long as possible: lied on the bed for long time, took a warm shower for long time, drank tea cup by cup. In the first day and night I felt very warm in the flat, though heating didn’t work yet. But Sasha and Katya wore warm clothes at home.

Previously on the road I got a problem with a pedal. I’d lost the plastic cap which protects the bearings against water and dirt. About three months ago I already got a problem with these cheap Chinese pedals, the ball bearings were smashed in a mess (have no idea what kind of metal was used for them), so that time I disassembled the pedals and put new bearings. But it was obvious that sooner or later I’ll have to change theses pedals. Sooner.

Sasha explained where the nearest bicycle shop is located, and I went there by tramway. It seems there are three tramway routes in Smolensk, coaches are either old soviet coaches (it’s nice to be shaked there) or new ones, I was very surprised there is free Wi-Fi in new coaches.

It turned out many shops and services don’t work in Smolensk on Monday. The shop was closed. I’d bought a new gas balloon (I thought the old one is nearly empty, but I could use it for 6 more days) and balaclava for the coming coldness.

The center of the city was renovated due to the celebration of 1150 years of Smolensk that happened a few days before my arrival.
Sleeping districts reminded the same districts in Moscow sometimes.
Almost all the streets I chose for wandering were very broad, sidewalks were broad as well.

On the next day I finally had bought pedals, found a host in Vitebsk, examined photos and played with Sasha and Katya’s dogs, they’ve got three lovely miniature schnauzers. 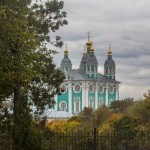 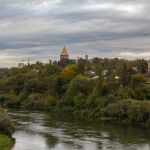