Apparently, in two nights I’d spent in the dormitory, its residents got used to my bicycle in the corridor and became to consider it as a part of furniture: I’d found a long sock on the handlebar. Attentive Nastya made me sandwiches to eat on the road and gave dried mint, with this mint I don’t feel the presence of food remains in the tea at all.

It’s always unpleasant to go out of the city: traffic lights, incovenient turns, you need to think where to go next. You don’t feel it when you arrive in a city: you know you’ll be in a place very soon, you need to endure just a bit.
In this situation a GPS-navigator is really helpful, though I need to stop to get it from a pocket. Usually I just turn it on in the morning to write the track, put into a pannier, and then take it back in the evening only to turn it off.

Due to high-quality Belarusian roads and monotonous landscapes with fields going till horizon I felt sleepy. But then I turned to R114 road, it goes through a forest, the bicycle jumps on hummocks from time to time, no drowse anymore. Many locals go from village to village by bicycle.

In the evening the sun looked out and illuminated everything around, and then slowly burnt down in the sunset. I took my camera for a shot, and then found a sleeping place in twilights. It’s getting dark earlier with every new day.

The whole forest was covered by strange grass, I couldn’t view the actual ground. The grass curled and curled, your foot goes down for thirty centimeters when you step on this grass. Due to the grass it was hard to understand whether I found a flat place for sleep or not. Only in the morning, when the grass was pressed by my weight, it turned out the place wasn’t quite flat.

On the next day I had to go by M3 highway a little, but I quickly turned to the road leading to the Latygolichi village. After 20 km asphalt changed into disgusting unimproved road with sand, but my previous experience on the way to Smolensk didn’t teach my anything, or maybe I wanted more adventures, and I didn’t stop. Luckily, I still could pedal there, though it was a slow ride.

In Latygolichi I couldn’t find the continuation of the road, locals helped me, unimproved road changed into dirt road, it became easier for riding. It was getting darker, and I tried to go from the village as far as I could. Finally I’d stopped in a beautiful coniferous wood, but I put the tent up in the darkness.

There is one thing I haven’t got used to yet. It’s a fear my sleeping place will be discovered by people. There isn’t a big chance that something really bad would happen in this case, but this fear isn’t about changing the place in the night or smth. like this; it’s the fear of uncertainty. You simply don’t know the typical scenarios how the situation would go on if you are discovered. I think it has to happen two or three times, after that I won’t worry anymore.

On the third day in the afternoon I reached Borisov and saw it’s only 61 km left. Initially I wanted to go from Vitebsk to Minsk in 4 days without any rush. But, again, I didn’t want to use my previous experience and rushed toward Minsk. In Zhodino I went along a long fence, there is BelAZ and many gigantic vehicles. I rode with the torch not long time, illumination appeared in 5 km before the city starts, and I even became dizzy, because I understood I’m quite close to the destination point.

The Minsk’s main road artery, enormous Independence Avenue, pierces half of the city starting in the center and ending exactly in the place, where the road to Borisov starts. Many sightseeings of Minsk are located along this avenue, so, even before the time I’d reached home, I could watch much in Minsk.

At some moment I’d seen a sign of bike lane. It was supposed that cyclists should use the same sidewalks that pedestrians use. It’s a very strange idea. But sidewalks in Minsk are even wider than in Smolensk and Vitebsk, so I decided not to break the law (if it’s regulated by law). Near GUM (Main Universal Store) the bike lane ended up by a pedestrian subway. I got rid of my stupid idea to use those bike lanes and came back to the normal road.

A friend of mine, Anton, met me at home. A few years ago we were flatmates in Moscow.
Finally I got someone to drink beer. For some reason I furiously wanted it the last few days. 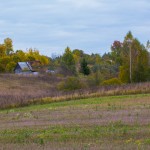 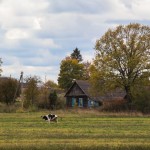 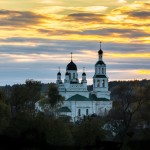 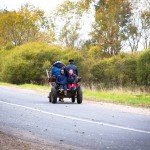 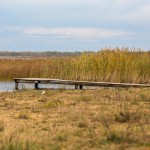 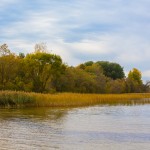