Viktor’s father, Slobodan, is a good musician. He played guitar and we sang traditional Russian songs and romances. I didn’t know some of them (Slobodan turned out to be a big lover of Russian culture and started learning Russian language in the university), so he joked: “Oh, you are Russian, you have to know this song!”

We went to the Viktor’s farm in the afternoon. Immediately I realised that I love that place. I could see that everything is built with love, and Viktor has a good sense of style. From technical point of view everything was done very well as well: solar panels, own source of water, big shed for tractor and fully equipped workshop.

The fog has disappeared for a while, we sat outside watching mountains and fruit fields, catching outgoing sunrays. It was hard to leave after the hospitality I’d got from Viktor and Slobodan.

The next three days I went quite fast by mountain roads. There were small problems with places for camping. Usually I found places near abandoned houses.

On the fourth day I became more and more tired and couldn’t keep the pace.

The difference between Serbia and Montenegro showed slowly. More villages, more drivers who honk. Dangerous dark tunnels. Usually there are a few grave crosses in front of them. Tunnels of any length in Serbia were always lighted.

Probably due to tiredness I started thinking that my rear wheel becomes deflated. My paranoia forced me to take the tyre off and check the inner tube. Everything was fine, but I managed to break the valve. I took a spare inner tube and spoiled everything again: tire lever had scratched the inner tube, so I had to put a patch on the absolutely new inner tube. It’s hard to take trouble with the bicycle when it’s cold. Anyway, at least the paranoia didn’t chase me anymore.

Finally, the road went downhill. It’s a very strange feeling: just one hour ago you rode on snowy roads, and now you are below and you put off more and more layers of unneeded clothes.

The way to Podgorica, the capital of Montenegro, went through the amazing canyon of the Morača river. Podgorica itself was uninteresting at all. There I turned to a shortcut initially, but I had no more power to go uphill again, so I went back.

It wasn’t the only time during that day, when I went back. I stopped at a junction. It said that the main road goes left through a tunnel, and another road went steeply uphill. For sure I’d decided to go to the tunnel. Unfortunately, cyclists and pedestrians are now allowed to go through the Sozina tunnel. Its length is more than 4 km, so a cyclist may be poisoned by carbon monoxide, even though the tunnel is ventilated. I waited about ten minutes with a hope that some truck will pick me up, and then I went back.

In the morning of December 31 I still had to pedal. After six kilometers by the lacet the altitude had changed from 50 m to 750 m. Luckily, that was the last ascent. And then meeting with Boris, Irina and Davor, warm shower, the last day of the year, a ride to Kotor by car, New Year’s Eve, and so on. 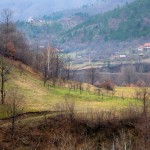 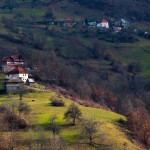 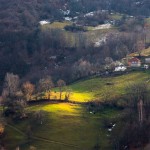 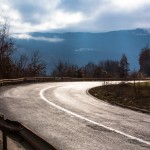 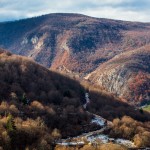 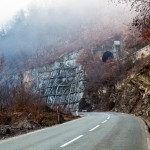 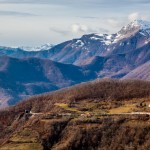 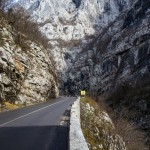 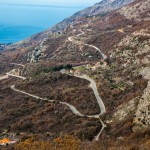